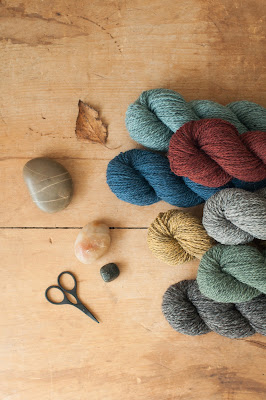 At Quince & Co our Kestrel 2016 collection is here! The Quince design team is on a roll this season and with this release, we have four gorgeous new garments by Cecily Glowik MacDonald, Bristol Ivy, Melissa LaBarre, and Quince's own in-house talent, Dawn Catanzaro. The garments they've produced for this collection all feature Kestrel, our worsted weight, linen ribbon yarn. Find Kestrel and more beautiful yarn at www.quinceandco.com.


Gradient Stripes yarns: only at Knitcircus! Short stripes move through a gradient as you knit your socks, with no color repeats. Each sock set is already wound into two cakes for your knitting pleasure and dyed to match exactly down to the stitch. Other knitters will wonder how you got such perfect stripes with no jog lines and you'll smile knowing that the yarn did all the work for you. Find it only at www.knitcircus.com.


I am also a Craftsy Affiliate. I enjoy taking Craftsy classes and have learned so much while taking them at my own pace. Have you seen that Susan B Anderson has a new Craftsy class on My First Toe Up Socks? If you visit my blog prior to purchasing a class or supplies I receive credit for it. Thank you!

This is most likely the silliest request for knitting know how ever, but here goes. I have made a pile of hats for my granddaughters who are going to Utah to ski next week. Of course they want big puffy pompoms on the tops of these hats. My perfect pompoms are wobbly and unstable. Is there a trick to adhere huge pompoms that are more secured on the top of the hat?

I pull the two pieces of yarn used to tie the pompoms through the top of the hat and tie them together then weave in the ends. The pompom pitifully wobbles and list and tilt to and fro. Hardly the effect desired!

Any words of wisdom from you or others?
All the best.
Mimi

The small circle of felt is genius and worked out just perfectly. I do look forward to your podcasts and gain so much knitting expertise from your wisdom. You make me feel connected to our “American” knitting heritage, as you studied with the Great EZ!

I have a question for you, Paula. How do you wash your hand-knit socks--by hand or in the washing machine? And then, do you hang them or lay them out to dry, or throw them in the dryer? I’m always curious when I look at blogs where knitters have a drawer full of socks they have made… Thanks. :-)

When I have a lot of socks to wash I use the hand wash cycle in the washing machine (front loader) and then hang or lay flat to dry. I use a wooden dowel dryer rack most of the time. I also have a wire shelving unit (several) in the basement. My mom actually gave me the idea of using these as a drying rack which I do when I can keep a few shelves empty. Wire racks used for cooking also keep air circulating around socks while drying.

Knitcircus came to the Knitting Pipeline Retreat! Amy has room in her Ireland Trip in September!

Ireland. The tour goes from Sept 16-28, and goes to many of my favorite places on the planet. This is my fourth tour to Ireland, so I have broken in my driver/guide to know just what we want to look for along the way!


·        We’ll stop by Hedgehog Fibers, the Cushendale Woollen Mills, and The Constant Knitter.


·        We’ll meet with the folks who run The Wool Shop website, and some of their local knitting friends.


Spring is here according to the calendar but if you look out in the woods now you won’t see many signs of my most beloved season. That is at first glance. Take a few steps outside and there are signs of spring emerging. Stop. Listen. When I returned from my trip the first thing I noticed was that my clumps of chives were quite tall and there was some parsley coming up through the leaves that were left last autumn after several hard freezes. Parsley is a biennial and when I’m lucky I can carry it over for another year. Then, today when I went outside I noticed that there is no sign of green at all. Apparently a hungry critter needed some nourishment. I’m guessing deer but there were no obvious footprints. That’s ok. The deer need it more than I do right now. In the woods the moss is greening up and there are a few tentative leaves out in the underground. A few spring beauties are blooming.


The sounds are quite different though as the birds have been in their mating season so we’ve been hearing lots of bird song in the mornings and throughout the day. I watched the courting dance of a pair of chickadees. There seem to be more cardinals here lately than we had during the winter. In previous winters we had large flocks of cardinals that appeared around 3 PM, taking turns at the feeders. This year we didn’t see those large flocks although we had a steady stream of visits from both male and female cardinals. Usually the flocks of northern cardinals break up when mating season begins so perhaps these are birds that have not yet mated.


After Christmas I took the lights off the planter on the porch. I bought it filled with greenery and had decided to leave that greenery out for a while. There were also some bare branches stuck into the dirt in the pot. When I arrived home from my trip I realized that it was way overdue to overhaul that pot. I bought a hanging basket of Boston fern at the local Big R. Then I started taking out the mostly brown branches. What I discovered was that the bare branches had rooted and were leafing out. One is pussy willow which I adore. I still remember when my grandmother gathered pussy willows and put them in a vase in her home. As a child I thought that little gray kittens were going to emerge from those branches! I left the leafing branches in the pot and nestled the pot of ferns between them. That night we had another hard frost and I realized the Boston fern could not handle that. I brought it in but it seemed to be too late. Most of the fern is black and ruined. Sad, but I still have the pussy willow and leafing branches.


Birds that have been frequently at the feeders recently are the northern cardinals, black capped chickadees, downy woodpecker, hairy woodpeckers (they love the suet), red-bellied woodpecker, tufted titmouse, and purple finches. We don’t know why our goldfinches, which were so numerous all winter, have dwindled down to just a single one now and then at the thistle feeder. We guess that we have a bad batch of niger seed so we’re going to try a new batch of seed to see if that works. They goldfinches are moulting into their summer colors but they still have a way to go.


How lavish is Nature, pulling down, creating, destroying, chasing every material particle from form to form, ever changing, ever beautiful. --John Muir, August 30, 1869. Atlantic Monthly.


I’ve wanted to knit this little sweater for a long time. The lace pattern is easy to memorize and is intuitive.


You can get a PDF version from the Shetland Wool Week website.
Posted by Paula at 1:48 PM