Episode 33 Of Lice and Men

Listen here or find all episodes on the Flash Player in the sidebar.

Quince & Co is a sponsor of Knitting Pipeline.  Visit them to find beautiful, natural fiber yarns from American sheep and responsible non-domestic sources.
Thank you for your prayers and greetings for my mom and her recovery.  Her arm is healing and it looks as if she will not need surgery.

Imagine!  An entire podcast episode revolving around the lowly and despised louse.  Crazy as it sounds  I will link Traditional Norwegian Knitting, a Scottish Poet, and an American Poet.

I give a short background on the Norwegian Setesdal Sweater, also known as Luskofte, literally "Lice Jacket".  The sweater tradition started about 1860 in Setesdal, a region in southern Norway.  The Luskofte is somewhat of a Norwegian national costume and the hallmark of Norwegian knitting.

To a Louse by Robert Burns is read by Alan Wood, friend of Louise Hunt of the Caithness Craft Collective Podcast.  You can find Louise's delightful podcast on iTunes or Podbean.  Thank you, Louise and Alan.

If you want to read more about the poem, check it out here.
To a Louse Interpretation

Robert Frost (1874-1963) was an American Poet with Scottish and English ancestry.  This is one of his lesser known poems.

A Considerable Speck by Robert Frost


My Book Recommendations for Norwegian Knitting
If you want to knit a Norwegian Drop Shoulder Sweater you can get the design information and charts from Elizabeth's Zimmermann's Knitting Without Tears, Knitting Workshop, or Knitting Around.  All are available from Schoolhouse Press and other booksellers.  Any one of these books will give you all the information you need.

Norwegian Knitting Designs by Annichen Sibbern Bohn is no longer in print.  If you can get your hands  on a copy, it is a little gem of a book. 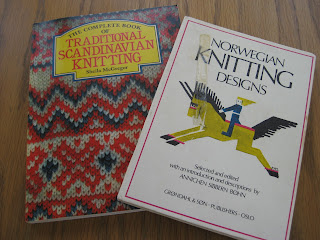 The newest addition to my Scandinavian knitting book library is, Setesdal Sweaters: The History of the Norwegian Lice Pattern by Annemor Sundbo.  Torridal Tweed.  2001.  Available from Schoolhouse Press.

I found some photos of my first Norwegian Drop Shoulder Sweaters and other Elizabeth Zimmermann designs.

Needle Notes
My finished project turned out lousy (groan).  These are the felted Baby Slippers from Knitting at Home by Leanne Prouse, a book that was reviewed in Episode 29.  Bronwyn helped me with the Bickford method of sewing the pieces together.  They should probably go through the washing machine again but nothing is really going to help that colorwork. Felting is really not my thing but I'm going to attempt the French Press Slippers before throwing in the towel. 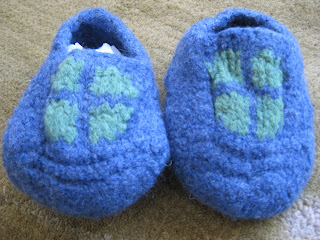 After Mom fell my Norwegian Sweater went into hibernation for a week.  I started on a new project (shawl) which I will share next week.  I also picked up a pair of socks that had been in hibernation since June. 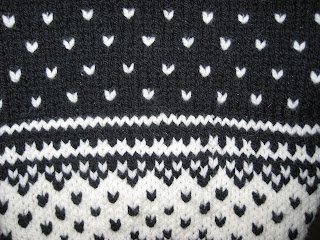 In the Piping Circle
Bruce Gandy, World Champion Piper, plays a set from his album My Father's Son.  Order the CD from Bruce's website.  Thank you, Bruce Gandy! 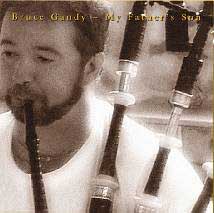 Thank you for listening to the podcast and for visiting the blog!
Posted by Paula at 3:00 PM

Oh Paula - I love that sweater. I shall have to attempt some of that type of stranded knitting. If I could just find the time, LOL. But it will be in my queue!

Paula, I loved looking at your photos and your outstanding knitwear. Wow.

Your mingling of "just the right poems" with the "lice" theme was wonderful, and I particularly enjoyed hearing A Considerable Speck. Like you, I was once a Frost-aholic. Hearing this made me remember why.

I look forward to watching the tutorial -- you're going to inspire this ol' Swedish/English/German gal to do colorwork yet! I think at this point, it is just a matter of time . . . and guts.

Your family remains in my prayers. I hope your mother is soon feeling better.

Great episode, Paula! Thanks to Alan Wood for reading To A Louse--it gave me goose bumps.

And also thanks to Bruce Gandy for sharing his song with us. I loved it.

Hi Paula.
I just found THIS blog today. Here is all your knitting:) I am so happy with your photos. It is so much easier to understand while listening for this foreign visitor.

I appreciate everything you have added to my knowledge base.Admiring the time and effort you put into your blog and detailed information you offer.Thanks. knitting factory