Listen here or use the Flash Player on the show blog.  Subscribe on iTunes!

This show is sponsored by Quince & CO  If you are looking to support American goods, then you can start with Quince & Co with their beautiful and reasonably priced wools sourced in the US.  Check out Finch, their new fingering weight in colors inspired by nature. www.quinceandco.com
Thanks for the birthday wishes last week!
Bereft by Robert Frost
Where had I heard this wind before
Change like this to a deeper roar?
What would it take my standing there for,
Holding open a restive door,
Looking down hill to a frothy shore?
Summer was past and the day was past.
Sombre clouds in the west were massed.
Out on the porch's sagging floor,
Leaves got up in a coil and hissed,
Blindly struck at my knee and missed.
Something sinister in the tone
Told me my secret must be known:
Word I was in the house alone
Somehow must have gotten abroad,
Word I was in my life alone,
Word I had no one left but God.
Needle Notes 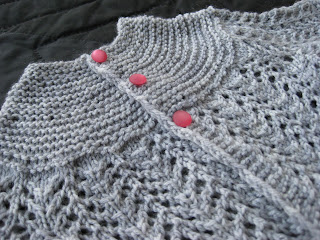 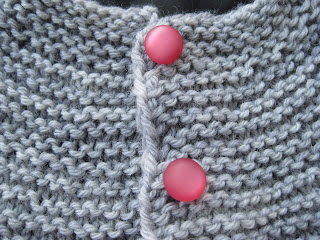 Baby Sweater on Two Needles by Elizabeth Zimmermann from Knitter’s Almanac.  It is better known as February Baby Sweater.  I used Knitter’s Brewing Company Fingering Weight sock yarn.
The February Lady Sweater (not by EZ) is actually more popular than the FBS. Projects on Ravelry: 6675 for Baby Sweater and 11,505 for FLS by Pamela Wynne
Knitter’s Almanac by Elizabeth Zimmerman. Schoolhouse Press  (February) Some Babies Things.  Have knitted everything in this chapter but the bonnet with the flap over the shoulders.
Leggings.  I have made at least two pair.  Red and white striped ones were the cutest.  Not the most practical garment for modern moms.
Blanket knitted from center out.  Have done it with lace and also in a heavier yarn with texture pattern and colorwork. Was told that pioneer woman put a cream or white border on blankets so Baby would perceive this is a boundary.  Per my experience, did not work.
Double knitting blanket was a carriage blanket.  I used Schoolhouse Press Sheepsdown and my own handspun.  May have steeked and put a zipper in it.
Blethering Room
Pete’s Socks…pulled off the colors!
Handed Down Patterns.    Joy started a thread asking about knitting patterns that have been passed down.  Mother’s slipper/bootie pattern she called pods.  Under “Some Things Never Change…”
In The Pipeline: EZ Saddle Shoulder Sweater
Book Notes
$14.99 Interweave knits Holiday Gifts.  Holiday 2011  Some of my favorites are McHenry by Susan B Anderson, Hollyberry Bonnet and Cape by Kyoko Nakyoshi, and Handwork Mitts by Julie Turjoman.  Recommended.
High Note:
Whole Wheat Cinnamon Rolls/Cinnamon Raisin Bread.  Used the Best Whole Wheat Bread Recipe from www.urbanhomemaker.com.  Divided dough in half.  One half for a loaf of bread and the other half made two pans of cinnamon rolls.  Streusel:  ½ c brown sugar and 2 tsp cinnamon.  I use Penzey’s.  Roll out dough.  Spread with softened or melted butter.  Sprinkle topping on and roll up.  For the rolls I reserved a few Tbs topping.  Took rolls out after 20 min.  Brushed tops with butter and sprinkled on the streusel.  Baked another 5 min.
I read a letter from Elizabeth Zimmermann from Jan 1980.  There are references to Moebius and her development of the concept. 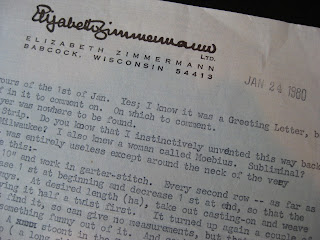 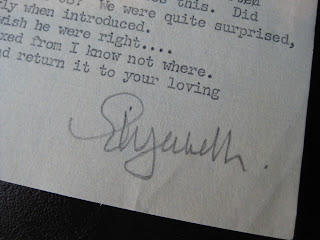 The musical selection today is The Moon of Wintertime by Lydia McCauley.  I appreciate each one of you.  Thanks for writing to me, thanks for participating in our Ravelry group, for leaving comments on the blog, and most of all for listening to the show.
Knitting Pipeline Retreat
March 2-3, 2012
Washington IL  61571
$50 for Fri night and Sat or $40 for just Sat
Reserve your spot now!
Haste ye back!
Posted by Paula at 2:51 PM

I feel honored that you share your EZ letters with me.
Thank you Paula!

I agree with rusticknitter. I have enjoyed the letters from EZ. They tell me even more about her personality than her books. Thank you so much for sharing them!

Thanks for a wonderful episode and reading another letter. Did I catch a reference to the Iran hostage crisis in Elizabeth's letter? I was a freshman in college at the time and remember the uneasiness this situation brought into the US. Also, must tell you that I roared with laughter when you said that you ate most of the cinnamon rolls. I recognize that guilty tone from conversations with myself. It was was funny to hear it from you. I'm looking forward to trying some of your bread recipes soon. Again, many thanks.

Thank you for sharing your EZ letters with us Paula. I have to go try that cinnamon roll recipe today. Thank you for the link!

Love the letters from Elizabeth!

Paula, I'm new to your podcast and just love it, and the gentle sound of your voice. I have no idea who would complain about your sharing letters from EZ or why, but I'm glad you let your own sensibilities rule.

Re Summer Flies, highly recommended! I've made two with Malabrigo sock yarn and will make more. Do note there's an alternate finish (lace) instead of the original pattern's stockinette finish. Tinpins on Ravelry details it on her Projects page, having named that shawl "Cordova Bay." It's a very pretty alternate finish, and fun to do.

Thanks for the podcast! I so much enjoy.
Carol

Keep the Elizabeth letters a coming. You must feel so privilege that you guys kept in contact letter-wise. Wow, you are the only person I know that had any connection to Elizabeth Zimmerman. Keep the knitting history alive!

Thanks for letting me know how to do review in i-tunes. I would try to locate that area and could not. Now that you pointed it out I am going down my list of podcasters and give them all positive reviews.