One Week on the Colorado Trail

Pete has been on the trail for a week now.  He called on Monday and left a message that all is well.  He had reached his first resupply point, or close to it on Saturday after the post office was closed.  He had a shower in Breckinridge and slept in the woods behind the public ice rink.  He said he needed a rest day so it worked out.  On Monday he went into Frisco to get his first box.

Nils has been keeping track of the mileage and in about a week on the trail, including the rest day, Pete has gone 143 miles.  That is averaging about 20 miles per day which was his goal.  He said he would call us Wed night or Thursday morning. I'm guessing it will be Thursday morning as today is July 4 so his phone will be in his supply box sitting in the post office in Leadville.  In his message this morning it looked as if he was quite close to Leadville so he might have had another rest day waiting for the post office to open.

It seems he is moving away from the area with the wildfires so I'm not as worried about him now. 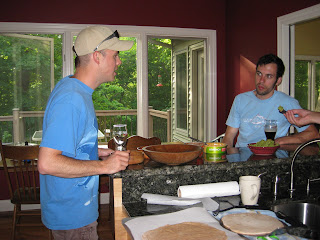 When both Nils and Pete were visiting we made homemade pizza on the grill. Those are my whole wheat crusts on the counter and Pete's guacamole aka "guac" on the counter.  Fun times.
Posted by Paula at 6:03 PM

I am so happy to hear that he is doing well and is safe. ;)

Thanks for the update. I've been curious. Glad to know all is going well.