This episode is sponsored by my Longaberger Home Business and Quince & Co.


Chickadee is a little darling—soft, plump, springy, and eager to loop into intricate color patterns or delicate textures. Its three plies, spun from softest American wool, are twisted together firmly enough to be sturdy, yet gently enough to be soft and cushiony.  41 beautiful colors to choose from and at just a little over $7 per 181 yd/50g skeins…you will find Chickadee a great value for your sport weight knitting.
Find Chickadee and the other Quince fibers at www.quinceandco.com.
You can find my Longaberger Home Business at www.longaberger.com/paula.  Please send me a personal message or visit my web site to sign up for my customer email list.
Feel free to write to me on Ravelry as PrairiePiper.
Instagram -- knittingpipeline and Twitter as knittingline.
Ravelry Group
Elizabeth Zimmermann was born on August 9, 1910.
Pipeliner Notes
Knitting Pipeline Retreats Group!
Tip from knit-faced/Carolyn who has also knit the Point of View Vest from Knitbot Linen by Hannah Fettig
Sparrow by Quince & Co in Nannyberry colorway
She recommends bamboo needle tips also and added While the linen is still wet “whap” it hard lengthwise. Let it dry to damp, then iron while pulling lengthwise.


From Kirsten/Ingabean
Hi Paula, I know it has been a while since you podcasted about this, but I just wanted to say how much I have loved the magic knot. I watched your video tutorial on how to remember the steps (previously I had looked up the original video every time!), and now it is easy. I have used it on every project that wouldn’t work for spit splicing, and it has been fabulous. I have also used it in other areas of life. My husband was trying to hang a 100 lb. punching bag from a hook in our basement ceiling beam, but all the knots he tried were slipping out. I offered to tie a double knot, and (though he is a former boy scout who prides himself on his knotting prowess) he stepped aside and let me. Now it has been several weeks and the punching bag still hangs at its original height! That is one strong knot! Thanks again for the great video to help me remember how to tie it.--Kirsten


·        3 nights lodging, breakfast at your hotel and two dinners in the Washington Room on historic Washington Square.  (All lunches and one dinner are on your own.)


Cost between $430 and $300 depending upon whether you choose double or single occupancy and whether you are at the B and B or Sleep In.


Nature Notes
Last week I mentioned that it has been a tough few years for butterflies.  We have been seeing more butterflies in the front garden on our zinnias and buddleia/butterfly bush.  Common Buckeye, Easter Tiger Swallowtails, Spice Bush Swallowtail, Silver spotted skipper, Red Admiral, and a Variegated Fritillary.  The Variegated Fritillary was actually trapped in our garage.  I took a few photos before helping it to the outside.  When we got outside it sat on my hand for a few minutes which was breathtaking.  I’ve had this happen with Hackberry Emperors and Tawny Emperors but not with any other butterfly. 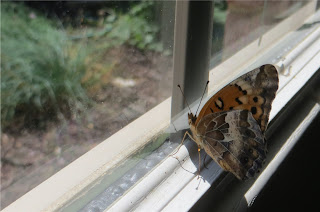 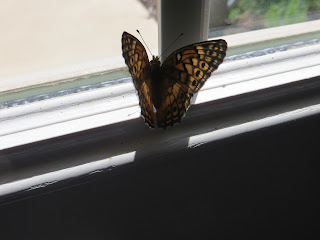 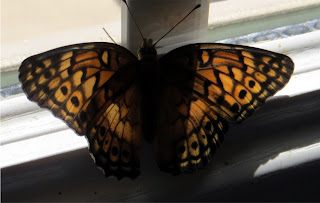 
Baby Cardigans by Susan B Anderson 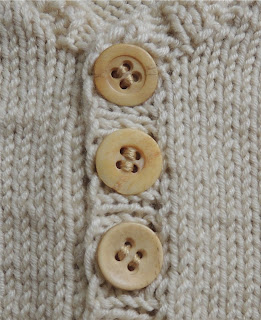 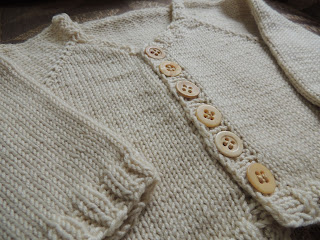 #2 Blue and Navy Sweater Patons wool from Louise in Caithness. 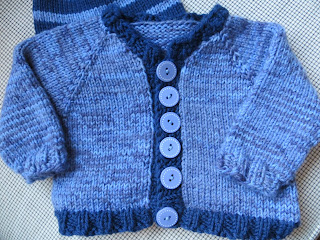 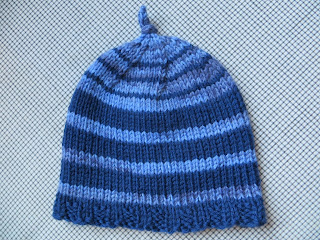 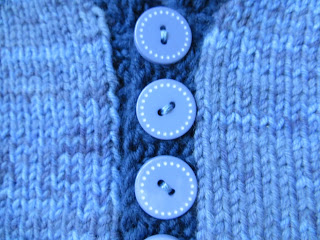 The Blethering Room
Myth Buster
Twin Set Ellen December 5, 2012.
My urban myth of knitting that I wish we could debunk once and for all is the “cast on over larger needle for stretchier edge” myth. This only works for certain cast ons, and doesn’t work for the popular long tail cast on. Sure, the first row of stitches, which are formed over the needle, are bigger, but the edge, which is formed over your thumb and then cinched up at the base of the stitch is identical no matter what size needle you use. To make it stretchier you need to consciously space out the stitches or do something like a German twisted cast on - or cast on over two needles, one for the base and one for the first row of stitches. With a little practice, this goes quite quickly.


This one surprised me because I had been taught by the great EZ herself to cast on using a larger needle and just recently a very well known designer had this instruction in her pattern.  So you are not alone if you still believe this.  As Ellen said, it depends on the cast on but if we are talking about the usual long tail CO, using a larger needle doesn’t work.


The Principles of Knitting by June Hemmons Hiatt p43 Knit Half-Hitch Cast-On
To conclude, it is a myth that casting on with a larger size needle when doing the long tail or Knit Half Hitch Cast On to increase the elasticity of the cast on edge.
Have a great week, haste ye back, and hold your knitting close.
Posted by Paula at 8:29 PM

I know there is a chance you will never see this, but I am trying to catch up on your podcasts and the mp3 on this post is #138, not 139. Any chance of getting the link for #139 or getting it edited here so that I can listen to that one. I try to save them to my mp3 player to listen to while walking.