Susan's podcast is fantastic!  Thank you, Susan, for the chat.

Our October Challenge...Rip Van Winkle
American folklore character Rip Van Winkle fell asleep for 20 years before waking up.  Were you "asleep" while others were knitting a project? What projects have been languishing in your pipeline? Leave your Rip Van Winkle projects in the comments section or in the thread on our Knitting Pipeline Podcast Group on Ravelry.  Your name will be entered into a drawing for a Longaberger Bouquet Basket!  This challenge will run through October.  You do not have to finish the project in October, but try to at least start on it.  (not a requirement though...I'm so EASY!)

And Ol' Rip has a connection for us knitters! There is a similar tale from Orkney. Washington Irving's father was from Orkney and probably told the folk tale to his son.  Hence, the rebirth of an old tale, in an Americanized version.  Read more here.

My possible Rip Van Winkle project is Evelyn A. Clark's Swallowtail Shawl which first appeared in the Fall 2006 Interweave Knits.

I finished The Cedar Leaf Shawlette by Alana Dakos.  Love this pattern and yarn.  The yarn is Pearl in the color Chimney Sweep by The Woolen Rabbit. 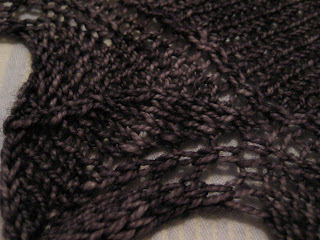 Nature Notes
Monarchs are migrating now.  Butterflies are on the wane.  I saw a fox stalk a squirrel this morning.  The squirrel won.


﻿﻿﻿
﻿﻿﻿At the end of the podcast there is a piping selection from In Harmony, a CD by The Dutch Pipes and Drums.  Track 3.  Heyken's Serenade.  The CD is available on their web site.