Listen here or use Flash Player.


Purpose:  To reawaken interest in Norwegian knittting and push the boundaries of these traditional designs.
Highly recommended for anyone with an interest in colorwork and traditional Nordic knitting.
Favorites patterns in this book:  Wilderness (p 38), Women's Long Jacket (p 69), Man's Jacket (p 72)

Purpose:  Make the historical pieces in the Vesterheim Museum available for knitters today.
One of my best knitting purchases in the past 10 20 years.  Beautiful layout with bits about Norwegian culture and the immigrant experience in the U.S.  A whopping 34 patterns with large charts and plenty of white space on the page so not to make me crazy.  Many new and interesting techniques explained clearly.  Charming vintage photos from late 19th century to early 20th century of Norwegian people both in Norway and in the U.S.

I knitted Ruth's Cap and found an error.  The sample cap shows a picot edge on the hem but the pattern will produce a straight purled edge.  Beware because the instructions for Ruth's Blanket will produce the same effect.  The pattern instructions should produce the sample.  Hopefully this type of error will be corrected in future printings.  And yes, I have notified the publisher.  Erratta are here but this is not yet listed.  The publisher wrote that corrections are being made to the second edition.

Our Honeymoon Backpacking Trip
After camping through Norway (mostly in the rain) we were happy to arrive in Kjelbotn to cousin Elisabeth and her husband Magnus. 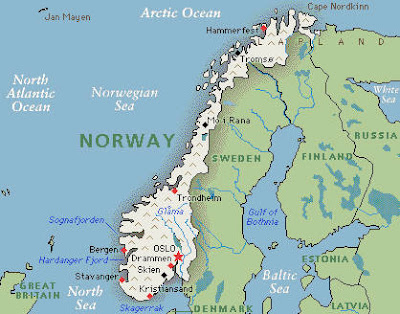 What wonderful photos. Thanks so much for showing them. I'm envious that you did that much traveling on your honey moon back in the 70's. Travel today is different. The world is different. You have some lovely memories. I've never been north of Trondheim, but my ancestors came from Hell, Norway, near Trondheim. We visited there in 1966.

Wow this book review regarding knitting is so good to see.Hoping to learn something constructive from this book as I really want to learn knitting so hard