Listen here or use Flash Player on this site.

Quince & Co is a sponsor of this episode.  Sign up for their free e-newsletter at http://www.quinceandco.com/ to keep up on the latest patterns and natural fiber news.


Thank you to everyone who contacted me this week.  A special thank you to The Knitmore Girls, Jasmin and Gigi, as they have mentioned my podcast several times on their show.
Nature Notes 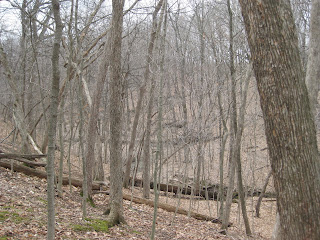 We set a new snow record in Central Illinois.  2010-2011 is now officially our snowiest winter on record.  The previous record was 1978-79.  We are a little over 52" with a good chance of adding to that during March, our transition month from winter to spring.

The woods are bare and a lot of animals are moving around.  I've seen a coyote trot past the window by my studio and a small herd of deer.  There are fewer birds at the feeder with the snow melted but we still have cardinals, goldfinches, woodpeckers, nuthatches, and more.

Talithia share that the local garbage dump is a good place to view wildlife.


There are flowers everywhere, for those who bother to look.
-Henri Matisse
We Like March

We like March, his shoes are purple,
He is new and high;
Makes he mud for dog and peddler,
Makes he forest dry;
Knows the adder's tongue his coming,
And begets her spot.
Stands the sun so close and mighty
That our minds are hot.
News is he of all the others;
Bold it were to die
With the blue-birds buccaneering
On his British sky.          ---Emily Dickinson

The Blethering Room
Faroe Islands are Scandinavian and linked to Denmark.

Both place names are derived from Old Norse and mean "Sheep Island".


Needle Notes
I frogged the man's sock I was knitting from Toe-Up by Chrissy Gardiner.

I used the Happy Feet yarn to knit a pair of socks for my size foot using The Faceted Rib Sock pattern from The Little Book of Socks by Charlene Schurch and Beth Parrott.

I also finished a pair of wristers "Those Mitts" by Leslie Friend with my modifications and a Care Cap for a friend who is having chemotherapy treatments. 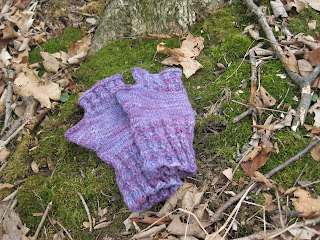 The Little Box of Socks by Charlene Schurch and Beth Parrott.  Clever format.  Recommended.
Kollage DPN's.  I decided to try these square needles after hearing a positive review from Abby on The Knit Knit Cafe Podcast.  I am going to add more of these needles to my collection.
Music is from the group Musica Pacifica.  CD Dancing in the Isles on Magnatune.   "Irish Lamentation" (English Country Dance)  Beautiful! Thank you for finding the sock videos. I feel I am new to sock knitting. Love the podcast. I am still listening to it. I paused it to watch thoose sock videos.

I love the little jars of yarn! It seems that I can never toss even the smallest bit of yarn. This weekend I'll be going out for some super size jars Thank you!

Another wonderful show, Paula. With my next pair of socks, I'm going to try the German Twisted Cast On. Nice job.

Finally a use for that old sun-tea jar!

Its really a wonderful show,thanks for nice videos.
Sport Socks