Knitcircus Yarns specializes in hand-dyed gradients and gradient stripes. We are always exploring new and inventive colorways.  Find at www.knitcircus.com and be sure to join our Ravelry group and listen to our podcast.


Knitting Pipeline is a Craftsy Affiliate. Craftsy offers affordable online classes that are yours forever. When you use the link in the sidebar before purchasing a class or supplies I receive a small percentage of your purchase at no extra cost to you. Thank you!

This episode is about my recent trip to Iceland with some wonderful Pipeliners and new friends. There were 20 of us wool-minded travelers and we had a blast. We will have Pipeliner Notes, Nature Notes, Needle Notes, and of course, In The Blethering Room. Feel free to ask questions!

So let’s jump right in!


Thank you to everyone who has been in touch with me.


Goalma who is Karol with a K from NJ, Angie in Louisiana, Morningthaw who is Kay from NE, ThePeekocrafter who is Aimee in Ireland, hookinggood who is Sherry in CA, Colletteknits who is Collette in Toronto, teaandknittingtoo from Cincinnatti, agziller who is annalia from Atwater CA, honeypottree who is Georgina in the UK, Jaime McCorry who is a piper with Midlothian Pipe Band in Chicago and a new knitter, Caroux who is Liz from the UK now living in SW france, honeymarit, and woolercoaster who is Christine from Toronto.


I appreciate your five star ratings and reviews on iTunes. 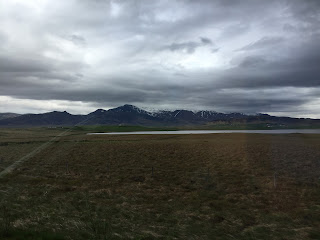 We arrived at the airport, which is about a 40 min drive from the capital city of Reykjavik. The airport is basically in a lava field. It’s hard to imagine how any life could be sustained on these rocks. Our first stop was the Blue Lagoon. I had read that the Blue Lagoon is too touristy, but it was the highlight for several travelers and a great way to refresh oneself after a long journey. If you go to Iceland, do make reservations at the Blue Lagoon. The Blue Lagoon is basically a giant hot tub fed by natural geothermal springs which are found across the country of Iceland. We changed into bathing suits and ventured out into the 40 degree weather to the lagoon. You walk down a slippery ramp, hanging onto the hand rail and into the hot water which was heavenly. There is a natural silicon sediment which you can feel on the bottom of the lagoon. It was the perfect setting to get to know one another and compare travel notes. We waded over to a facial bar so we could get globs of silica to smear on our faces. After washing that off we could get a free mud mask from a guy who knew how to work the crowd or pay to get an algae mask. It was all good and great fun. We were there about 3 hours, had a bite of lunch, and then hopped our bus for the hotel.


Our hotel was centrally located on the main walking street of Reykjavik, close to shops, including a grocery store called Bonus, which is a bit like an Aldi.


Our first outing was called the Saga Circle Tour. Our first stop was at the dye workshop of Gudrun Bjarnedottir. Gudrun is a biologist at the nearby agricultural college. She uses natural dyes, most of which she gathers from nature, to dye Icelandic wool. The colors were so gorgeous and I succumbed to a shawl kit with 6 colors and added in a 50 g skein of a natural color in case I want to add a border. 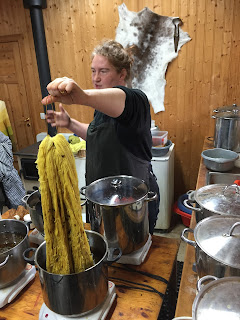 We then went to our second geothermal experience only this time we weren’t getting into the water because it was literally boiling up from the earth. There were caution signs HAETTA! And safety cones to keep people away. Meanwhile it was quite cold and windy. If you saw some of my photos on Instagram, you know that it was a chilly time there. The temperatures were in the 40’s at night and up into the 50’s in the daytime with wind and rain. It didn’t rain hard when we were there but there were days when there was a pretty constant, light rain. Actually, we were fortunate with the rain because it always seemed to rain the most when we were in the bus or in a building. Also it was light 24/7! Hotels had blackout curtains.


We visited a lot of waterfalls on the day trips that we took and each one had its own personality. The first one was Barnafosser…I think. You could spend weeks in Iceland and not get to all the waterfalls. There was snow still on the mountains. The mountains reminded me of the Scottish Highlands as they are quite barren of vegetation…mostly moss and lichen. They have a stark beauty that was quite breathtaking.

Did we see wool in grocery stores or convenience stores? No, but other than the Bonus we weren’t in grocery stores much. You do see wool, mainly Lopi, in all kinds of stores along the Laugavegur and other streets in the city. There are a lot of shops that carry Icelandic products, souvenirs and Lopi was in all of these. Lopi is pretty much the only inexpensive item in Iceland. It’s about 3.50 to 4.00 per ball. There are so many gorgeous colors that were so tempting…I had intended to get a sweater’s worth for my husband, but I ended up getting an assortment of fall inspired colors for hats and mittens. I actually purchased most of the lopi at Alafoss when we visited on Monday.


Alafoss is considered the heart of the wool industry in Iceland. The Istex mill is where all the wool is processed. A lot of us bought wool there and some purchased gorgeous sweaters.


Lopapeysa (Lopi + Sweater) are the Icelandic Sweaters that are practically an icon for Iceland. If you are not familiar with them, the body of the sweater is usually a natural color, sometimes with some stranded color work on the bottom of the sleeves and above the ribbing and then there is stranded color work in the yoke. We learned that these sweaters were actually created for the tourism industry in the 1950’s but now Icelanders wear them also so they have become part of Icelandic tradition but they don’t go that far back. 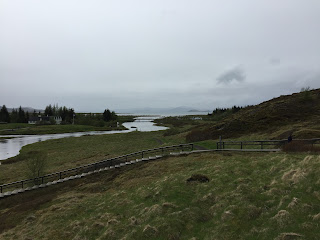 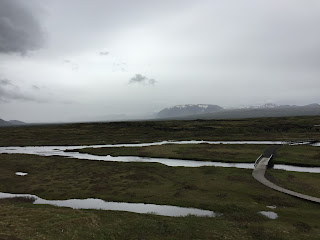 On the third day of our trip we were headed for the Farm Hotel called Efstidalur but not before seeing several magnificent sites. This day was possibly the highlight for me because we went to the Thingvellir National Park. Ever since I read the Icelandic sagas (not all of them) during my college days, I’ve wanted to visit this place. This is the plain where Icelanders met to settle disputes and matters of law starting around 930 AD and ending around 1798. It is considered the first Parliament of the world. It wasn’t exactly as I had imagined because I had always thought of it as a flat plain, which part of it is, intersected by bodies of water. I have to admit I got a bit teary when I thought about the history of this place.

There is a flag pole with the Icelandic Flag on a high rock which may have been what they called the Law Rock, or Lögbjerg.

The lead-up to the adoption of Christianity is well described in Njáls Saga:

"The following day both sides went to the Lögberg, and Christians as well as heathens named witnesses and denounced each others laws and regulations. Then there arose such a tumult at the Lögberg that no one could hear what anyone else said."

There is a waterfall here as well. It pours into what is called the drowning pool where women accused of adultery were drowned. What happened to the men? Nothing.


What I didn’t know is that it is an important geological site as well. This is where two tectonic plates, the North American and the Eurasian plates meet. Tectonic plates (a term that was new to me) are sections of the earth’s mantle that are constantly shifting due to the heat in the earth’s core. You can see the large chasm formed by the plates. This is the only place in the world where you can see the intersection of plates as most of these are below sea level and/or in the ocean.

Our word geyser comes from Icelandic Geysir which means gusher.

Strokkur Geysir (Strokkur means “churn”) erupts every 6 to 9 minutes. How many times has it erupted since we were there? 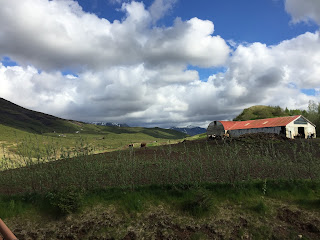 Ice cream parlor with their own homemade ice cream from their own cows. The parlor has windows so you can see into the barn where the cows are. We made use of the ice cream parlor. The food there was fantastic! Both are dinners there were included and they were delicious. They do local meat, fish, and produce as much as they can.

Karen, Sarah, and I went on a walk and one of the hotel workers was roping off an area behind the barn…

Later that afternoon was the day the cows were let out of the barn for the first time after being in there all winter. How could we get so lucky? We saw a lamb being born and the cows dancing—all in one day!

One of our sunny days at Efstidalur. 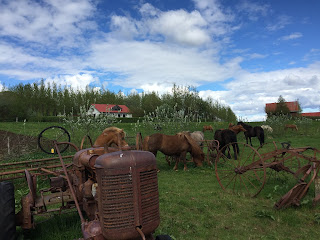 On way back to Reykjavik from Efstidalur we Visited Open Air Museum and several lovely yarn shops Amma Mus, Storkurinn, and Litla Prjonabudin.


The following day we spent the day in Reykhavik at the studio of Helene Magnusson. She showed us  a lot of her designs and samples and then we did a small sample of a traditional Icelandic shawl called Hyma, which is pretty much a standard triangular shawl. 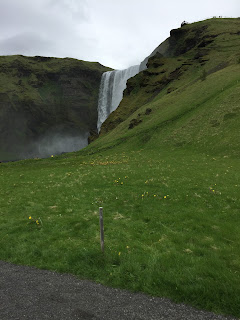 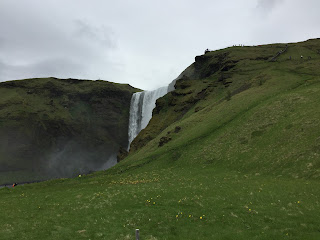 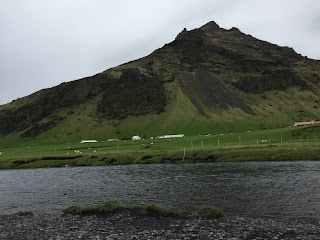 After the workshop some local knitters came to mingle and knit with us. They brought some of their Show and Tell which was fabulous. Added to our queues.


Last scheduled tour was the South Shore Tour. Visited a yarn shop called Thingborg which had yarn that was their own blends, handpicked lambswool. 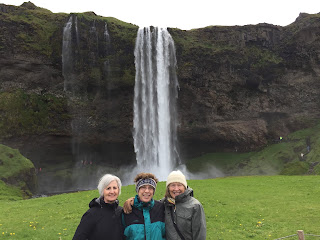 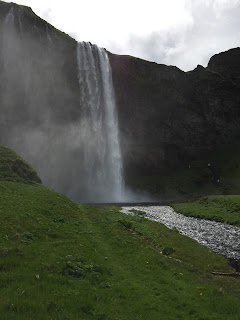 Fire and Ice by Robert Frost


Some say the world will end in fire,
Some say in ice.
From what I’ve tasted of desire
I hold with those who favor fire.
But if it had to perish twice,
I think I know enough of hate
To say that for destruction ice
Is also great
And would suffice.


Have a great week, haste ye back and hold your knitting close!

This was a wonderful episode. I have had 2 friends go there and I especially like the geyers and how you talked about the wool.